In the Midst of Chaos Sowing Seeds of Hope

The Shock of War

No one believed that Russia would attack Ukraine, and when they did, everyone, including the Ukrainians, were shocked. I have friends all over Ukraine, and they started sharing with me harrowing stories of bombings, constant fear, confusion, food and water shortages. I was in shock that this could be happening in Europe today.

A Great Desire to Help

Day after day as I followed news of the war, I felt an intense need to help but had no idea how. So, I began asking God to send me an opportunity where I might help: I immigrated to Israel from Latvia when I was a little girl and grew up speaking both Russian and Hebrew. With my language skills, I felt that I could offer practical help with the refugees who were beginning to stream into Poland and Germany.

Within a week, God sent me an opportunity through a ministry my husband works with: I was chosen to put together and lead a team of Russian\Ukrainian-speaking Israelis to volunteer for a week at a refugee intake center in Berlin, Germany. Financial and practical support for the refugees was pouring in from all over the world, but there was still a great need for Russian-speaking volunteers.

While I was choosing my team of volunteers, the team we would be replacing debriefed me: the hours are long, the work intense and emotional. I knew that I had to choose the volunteers who would join us carefully and prayerfully: they needed to be strong believers, able to withstand the challenging physical conditions and also have the emotional maturity to be able to offer the refugees spiritual and emotional support. The eight individuals who joined my team are amazing people: ranging from ages 22 to 60, each one was willing to put their lives on hold and to invest their time and energies in this important undertaking. We spent a lot of time in prayer together before we left—we knew that we would need God’s grace, protection, strength and wisdom to be able to do what He had called us to do.

Our team arrived in Berlin and were brought to the central train station where refugee transports arrived all day-long. We went through an orderly briefing, were cleared as volunteers and received a special orange vest indicating that we were qualified to volunteer (orange meant we spoke Russian or Ukrainian). At first, we were overwhelmed by the size of the train station—it is enormous, more like a city. But very quickly we learned our way around and, within a day or two, knew it like the back of our hands.

As we were receiving our orientation at the train station, we came to a platform where a train of refugees had just arrived, and I found myself suddenly overwhelmed by the sight of all those refugees, mostly women with children, exhausted, confused and broken. I wasn’t sure how I was going keep it together to be able to help them. But amazingly, God gave all of a certain numbness to our emotional shock so that we could do the work He had called us to do. 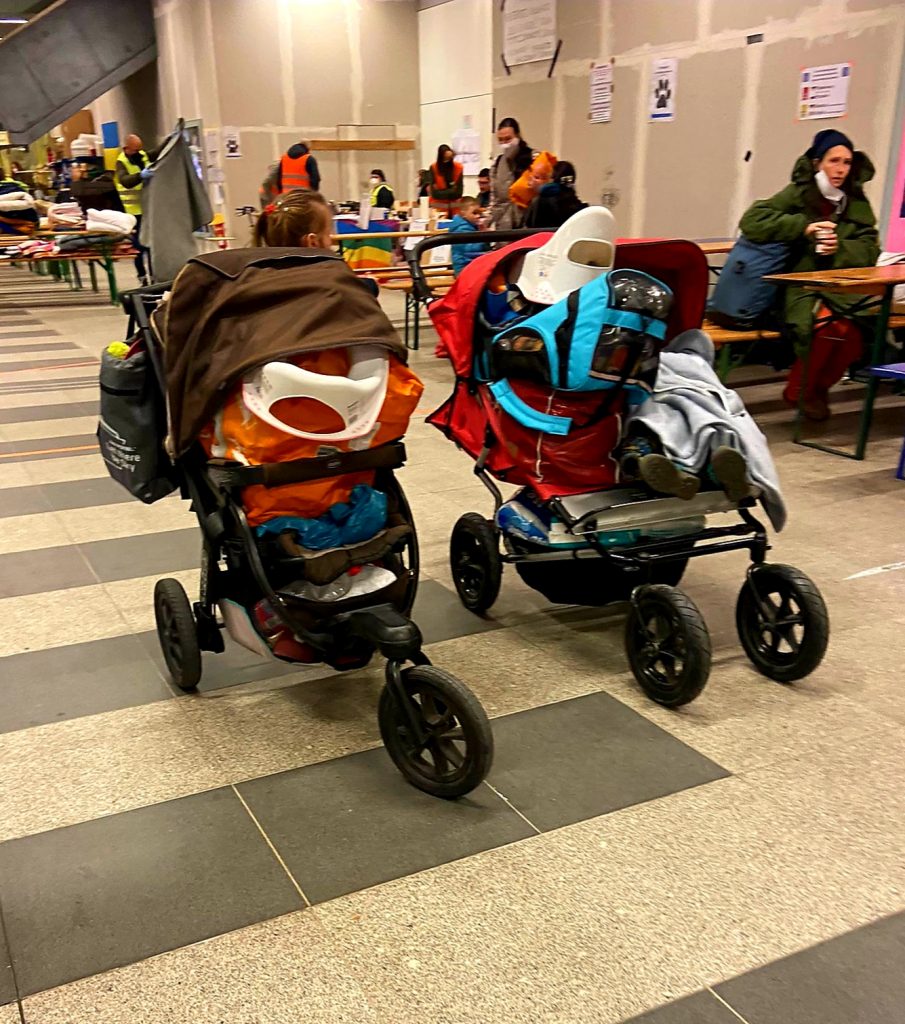 What was special about our team

There were many volunteers from Germany and all over Europe, but Russian\Ukrainian-speaking volunteers were few. We got along amazingly well with all the different volunteers and were blessed by the cooperation and teamwork there was between us. All the local volunteers and the refugees knew that we were from Israel. They also came to know that we were Israeli followers of Jesus who were there to share the love and hope of God with them.

Trains arrived every couple hours all throughout the day with anywhere from 300 to 700 refugees per transport. Our job was to help the people off the train, direct them to their connecting trains or to buses going to temporary housing, or to various rest areas in the train station for food, medical help, diapers or hygiene products.

Sometimes we only had a short time bringing them from one train to another in which to share a few words of encouragement. If there was time, we always asked if we could pray for them: everyone wanted prayer. No one who refused. 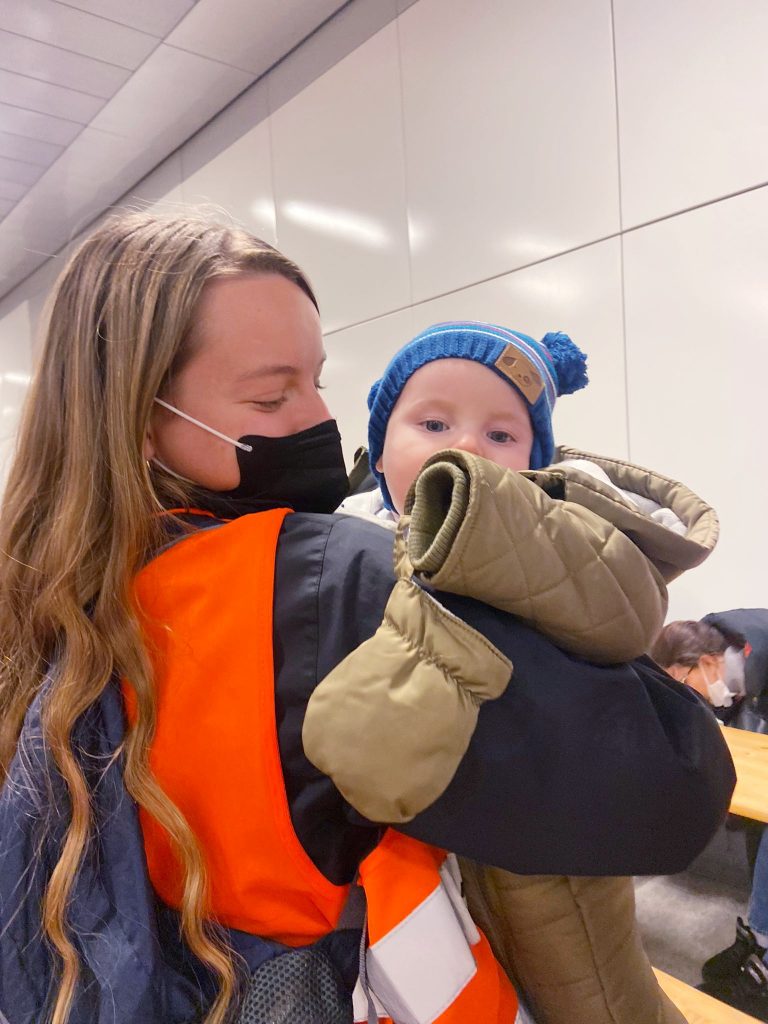 One of the disturbing things we discovered was that human traffickers were there at the train station trying to exploit the vulnerable women and children. Quite a few times there were warnings sent out among the volunteers that predators were spotted trying to take young women and children – this is a sad reality that my friend and colleague Moti Cohen at Tiferet Yeshua knows through our outreach ministry in the streets of Tel Aviv where he has seen an alarming number of young teenage girls from Ukraine showing up on the streets. Each time the volunteers received a message about human traffickers, our team came together and prayed: each time, praise God, the perpetrators were caught and the children returned.

What was special about the refugees

Ruth, a volunteer from Tiferet Yeshua who joined our team, shared that she was struck by how kind and thankful the refugees were. We never heard anyone complaining or angry at their situation. Every single one expressed sincerest gratitude and thanks, which is amazing considering that these were mostly women with children who had left their husbands behind in a war zone, with all they had in the world packed into a couple bags, arriving in a place they don’t know the language and have no idea where they’ll be staying. 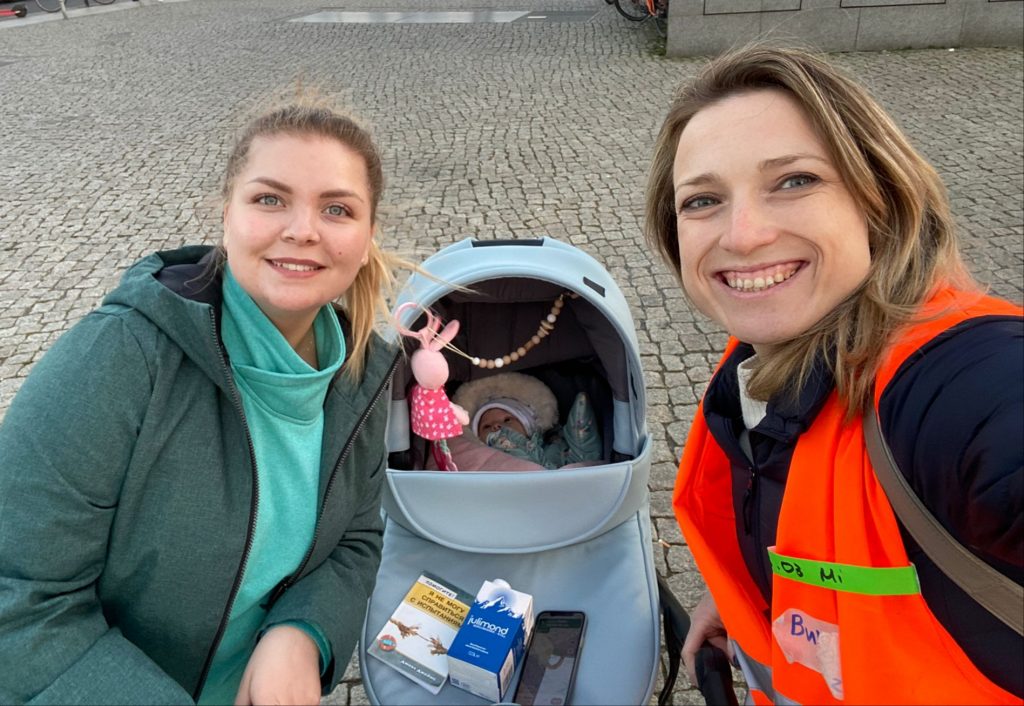 This woman’s husband brought her and their 3 month old to the Polish border. I helped her onto the train and asked, “Where is your bag?” She said, “I don’t have one.” All she had was what she could fit into the baby stroller

We were amazed by how much love we received in return from the people we were serving. We felt that God directed us to those who needed our help the most. Countless times we were able to pray with people, and many opened their hearts to ask God to come into their lives. We got so many warm, heart-felt hugs from people! The mother of two young girls I had time to take McDonalds for lunch told me, “Seeing you come all the way from Israel to help us gives me hope there is still good in the world.” I told her, “It is the goodness of God that brought us all the way from Israel to help you.” 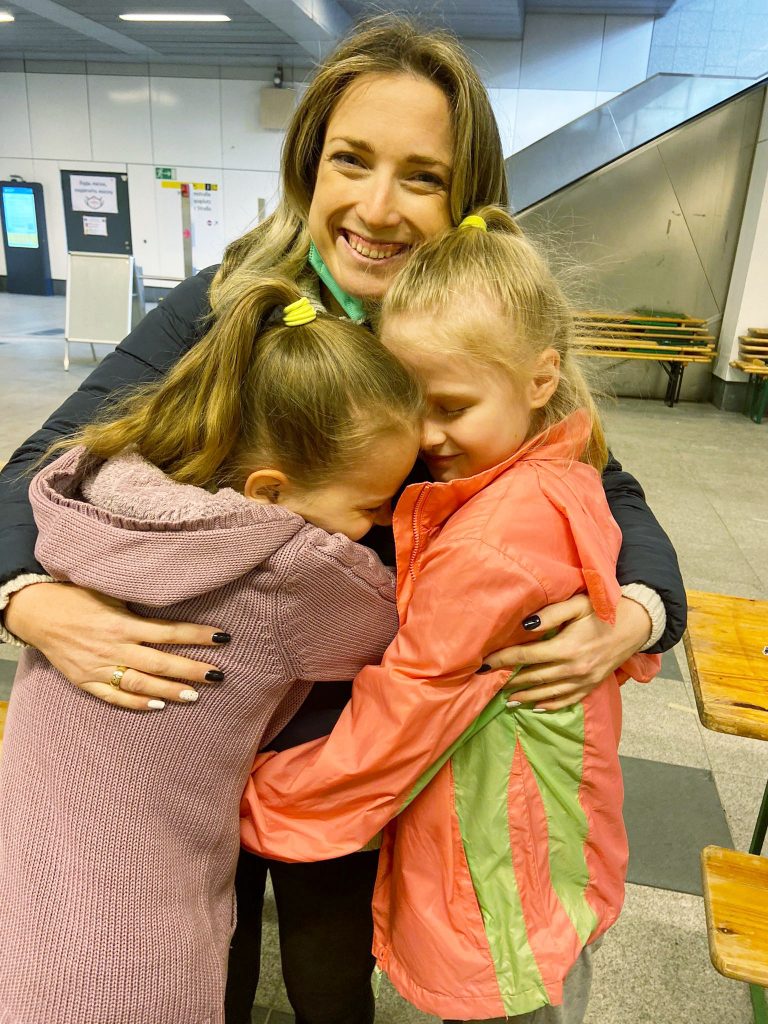 Every connection was special, but there were a few instances that were extraordinary or that left a powerful impression on me. One afternoon I arrived on a train platform and a German volunteer who saw my orange vest indicating that I was a Russian\Ukrainian-speaker motioned for me to come help her. She was trying, unsuccessfully, to communicate with an elderly woman in a wheelchair. I started speaking with the woman and quickly discovered that she has a son living in Israel – many of the refugees arriving did not have cell phones or cell phone service. This woman gave me her son’s number and I immediately contacted him in Israel on WhatsApp to let him know that his mother was okay and sent him a picture of her. He was so incredibly thankful: it had been many days since he had last heard from her and didn’t know whether she was alive or dead.

One day I approached a thin, pale young woman with one small bag in her hands who looked completely lost. She did not know English or German and asked me to accompany her to the next train she needed to take. She told me that she had escaped her city in a hurry on a bread truck and that all along the way out of the area they were exposed to intense bombardment from Russian tanks. I could see that she was very traumatized. I prayed for her and encouraged her that God is close to her: all she needs to do is to call out to Him in Jesus’ name and He will be there to help her through every situation. She thanked me with tears in her eyes before she got into her next train.

Before I left Israel, I posted on social media that I would be in Berlin helping with refugee transports. In Berlin, I started receiving calls from people in Israel asking me to meet their relatives who were on their way to Berlin from Ukraine and had lost contact along the way. One family asked me to look for a 17 year-old girl who had been on the road for a few days by herself with no internet and no possibility to call. Her family sent me a picture and, amazingly, we were able to find her, let her talk to her family in Israel, and help her onto her next destination.

I can’t begin to even scratch the surface of all the stores we heard, all the connections we made, how God put us in the right place at the right time to help people in distressing situations, and how many opportunities God gave us to simply show these precious people His light and love and to sow seeds of hope and faith in their hearts.

Please do not forget about what is happening in Ukraine, even though the headlines might be losing their impact after several months of war. Please pray that through all this difficulty and suffering the Ukrainian people would find comfort in God and draw closer to Him! 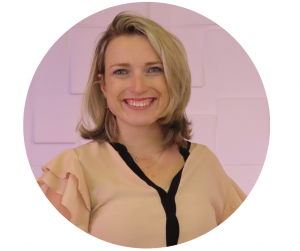