For nearly two years of corona many of these holocaust survivors were isolated in their homes and unable to gather with friends and family. The opportunity to celebrate together one of the most nostalgic and meaningful holidays for Jews from Russian backgrounds was a great blessing for them.  All of those invited knew they were coming to a holiday celebration hosted by Messianic Jews, and they all came to Tiferet Yeshua on their own, taking busses or taxis and then hiking up a flight of stairs—people in their eighties and nineties! 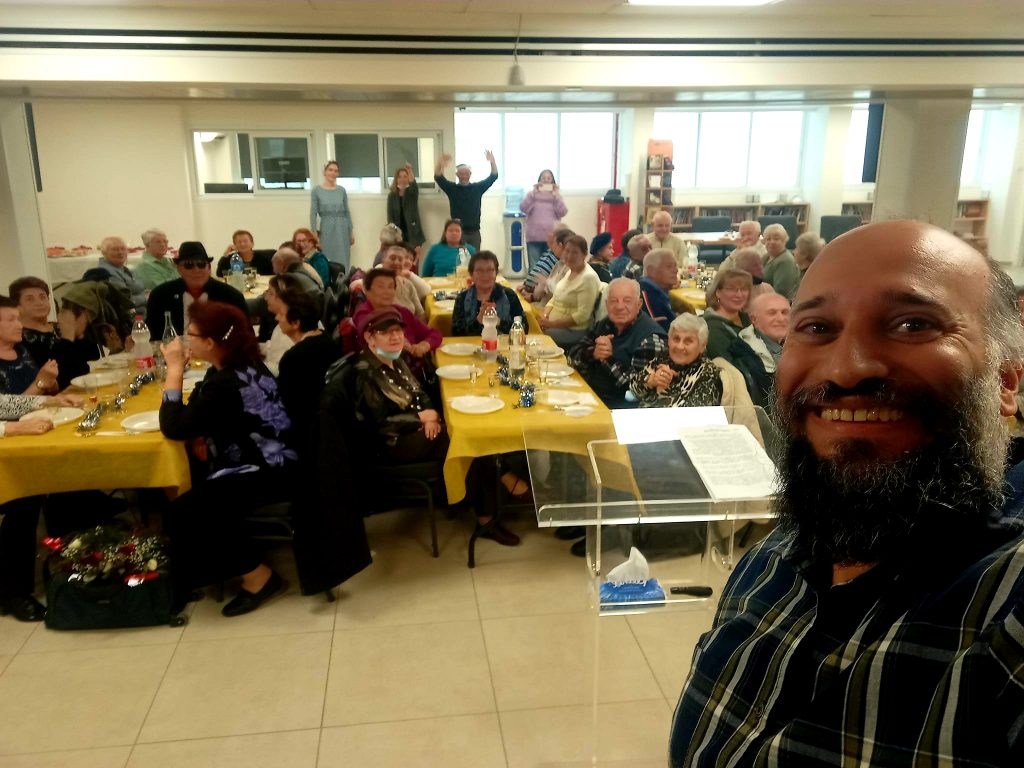 Our goal was to bless and serve our special guests. When they arrived, we escorted them to decorated holiday tables and treated them to a traditional holiday sing-along in Russian. Afterward, we began serving them their holiday meal. One of my gifts that God has graciously allowed me to use for serving others in His name is cooking: each week I prepare home-cooked, wholesome meals for our street outreach to the homeless. This time, I used my cooking skills to dive into a culinary tradition that is completely new for me: the traditional Russian kitchen! With help from my wife who speaks Russian, I watched YouTube videos of Russian “babushkas” cooking traditional dishes, consulted with some Russian mothers and grandmothers here in Israel, and followed their directions exactly.

When I introduced myself to the group with the help of translators, I told them that their holiday meal was prepared by a Moroccan\Persian Jew who has never tasted any of these dishes before: that fact delighted and touched them. At the end of the meal, a very old man came up to me and emotionally shared that one dish in particular that I made brought him back to his childhood in Moscow. For me it was a great honor to be able to serve these special people who survived the greatest human atrocity in living memory and chose to immigrate to Israel. And it was an honor to share with them the love and hope we have God: He truly blessed the time we had together with a spirit of openness, and Kosta and Victoria, who are both of Russian backgrounds, followed the gentle leading of the Holy Spirit to share encouraging words of hope from the Bible and New Testament.

For me this event was very special because my grandmother is a holocaust survivor from Latvia. At the beginning of WWII when the Nazis invaded Latvia, my grandmother fled to Russia with her mother and siblings. After the war, they returned to Latvia: that area of Latvia boasted a Jewish population of a several hundred thousand before the war. After the war, there were only three hundred Jews left.

When I was serving the holocaust survivors, I felt like I was serving my grandmother, and it was a great honor for me. Holocaust survivors deal with very complicated psychological and spiritual struggles. In addition to trauma and survivor’s guilt, many of them see the holocaust as proof that God doesn’t exist. I shared with them from my heart that their survival, just like my grandmother’s, is a miracle, and that the reason we are here today is because God has a perfect plan for His people Israel and for each one of them. 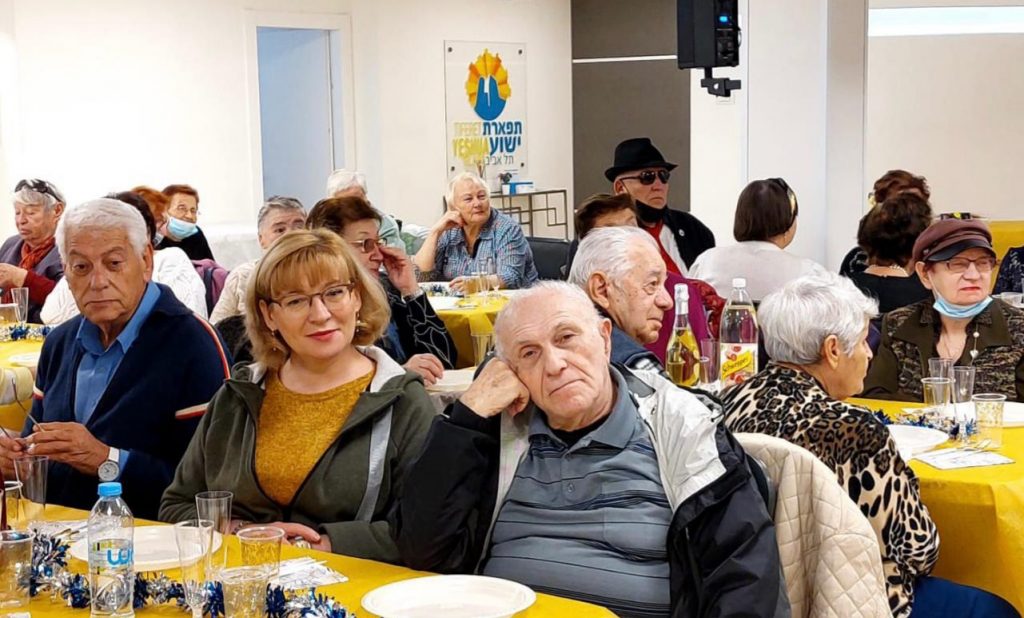 I felt it was important to emphasize that the miracle of the survival of the Jewish people and the establishment of the Jewish state are proof that God exists and has a plan for us. His plan for us, I told them, is that we would get to know Him. Afterward, many of them came up to me to express their thanks and tell me how touched they were by what I shared. Praise God for His love for these precious holocaust survivors and their open hearts!

“Novy God”, the Russian New Year celebration, is the most important and sentimental holiday for Russian Jews. Since all religious holidays were banned during soviet times, this holiday became our sole and central holiday. I shared with the holocaust survivors that I immigrated to Israel from Russia when I was a teenager, and that for all of us this holiday reminds us of warm, joyful times with our families. 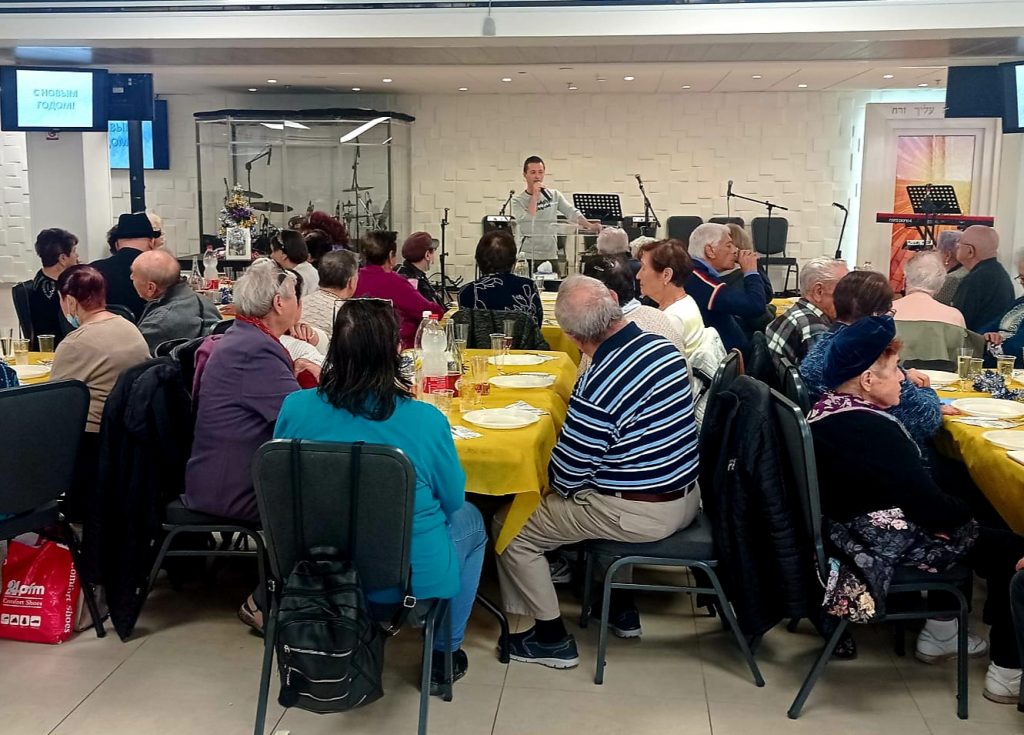 While they may feel alone in their day to day lives, especially during covid, I wanted them know that no matter where they are, God is very near to them, as the Word says, and that He has special compassion for the lonely and broken-hearted. God then led me to read John 3:16 to them in Russian: a simple, powerful declaration of the gospel from the Word. All of us on the team felt that there was a special openness with these dear people and that God touched many of their hearts. Please pray that the Holy Spirit would water the seeds of hope from God’s Word that were sewn in their hearts, that He would speak to them in their times of loneliness and isolation and bring them comfort and peace in Messiah Yeshua.