First Aid and the Gospel of Love

Feed Tel Aviv was born as a response to the dire need caused by homelessness in one of Israel’s worst areas not far from congregation Tiferet Yeshua. Our desire was to meet the immediate needs of those living on the streets in this area. As we began, the Lord gave me these verses from James 2 to be our guide:

“Suppose a brother or a sister is without clothes and daily food.  If one of you says to them, ‘Go in peace; keep warm and well fed,” but does nothing about their physical needs, what good is it?’”

As an outreach, we want to provide for the physical needs of the people living on the street which are, first and foremost, food and warm clothing. In addition to food, warm clothing, and unconditional love (of course!), we also need to have a first aid kit with us at all times.

It is hard to imagine what it’s really like living on the streets—the hunger, the extreme weather, the rats. And you would be surprised how not having the basics of soap and water can put someone’s health at risk. People living on the streets often end up in the hospital because of wounds that have become infected, and some even end up with limbs amputated because the infections are so severe. When our team of volunteers goes out onto the street, we make sure to have basic first aid with us to be able to treat wounds in the people we meet. 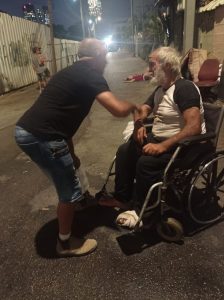 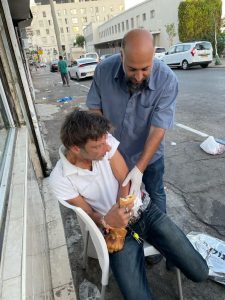 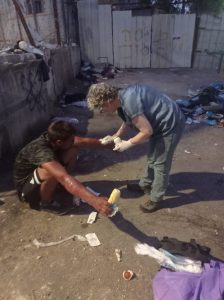 Living on the streets also puts people under the constant threat of physical violence. One evening, a young man we know well, came to the soup kitchen facility with his face covered in blood. He was breathing hard because he was in such pain and asked us if we had antiseptic. I saw that his nose had been hit and  was badly cut. Our volunteer team immediately took him to the sink and gave him towels to first stop the bleeding.

Like I mentioned, we have known this man for a long time, and he is one of the toughest guys on the street. His Russian accent might fool you, but he also speaks fluent Arabic. In the IDF, he was a commander of an elite unit that would disguise themselves as Arabs, and, from within the Arab community, they would neutralize terrorist activity.

So here is this big, army commando with his nose smashed in, telling us what we need to do to take care of his wound. We could see it was severe and were trying to convince him to let us call an ambulance, but he would not have it. Finally, one of our brave volunteers, Laylah, stepped up and began pouring antiseptic over his open wound. I can’t imagine how much it hurt, but he didn’t make a sound. 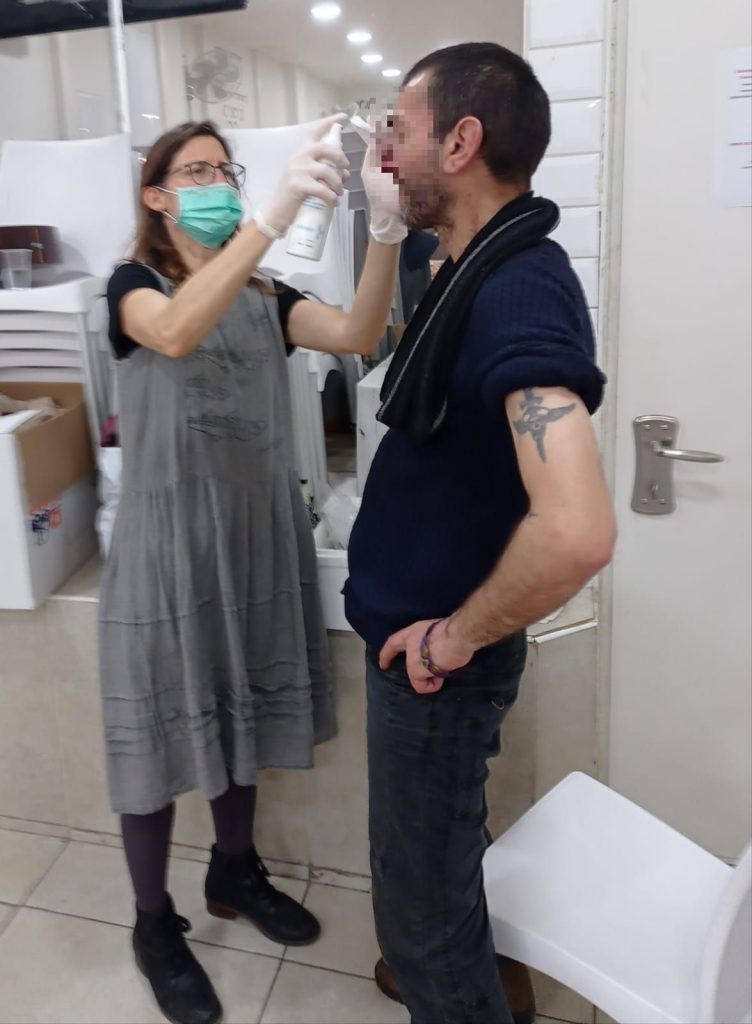 Some of the others then came and started praying for him. After that, we were able to convince him to let us call an ambulance for him (because he really needed professional medical care). A week later we saw him again, and this time he had a smile on his face. His wounds were healing, and he thanked us for the help we gave him. We thank God that we were there for this young man that night, to help, support and to pray for Him.

Thanks to your support of us, we can continue being a living witness of God’s love by bringing practical help and first aid to those who desperately need it.