A Special New Years on the Street

Happy New Year dear friends! I would like to share an update with you about our weekly outreach Feed Tel Aviv. Yesterday was New Year’s Eve and, because my wife has a Russian background, I know that this holiday (called Novi Gode) is a very festive and nostalgic time for those who come from the former Soviet Union. Russian Jewish immigrants in Israel celebrate this holiday with certain foods, and I decided that after our regular meal distribution to serve one of the staples of the traditional “Novi Gode” food that every Russian associates with the holiday: smoked salmon served on white bread with lots of butter. The Russian speakers in the area of our outreach (drug addicts and women enslaved in the sex industry) were excited and touched by the special holiday food. Some of them, with tears in their eyes, said that it was the loveliest surprise they could have had. They were touched that I, with my Moroccan Jewish background, would care enough to do something special for them. This very simple dish that we served created a special atmosphere, smiles and even laughter which is extremely rare for people who live a daily existence of so much suffering. Praise God! 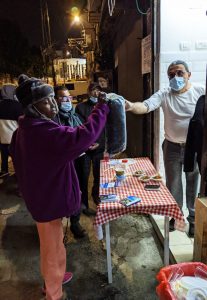 This year our congregation received a generous donation from believers in South Korea which has allowed us, among other things, to purchase winter gear for the homeless which arrived this week. So, on New Year’s Eve we were able to hand out blankets, sleeping bags, warm socks, hats and gloves to the people living on the street who suffer greatly during the winter months. We give all the glory to the Lord, and we would like to thank our friends for their generosity: your support is enabling us to continue serving in our calling as a congregation to shine the light of Yeshua here in His homeland Israel!

We pray that God would bless you abundantly in 2021 with the blessing He has promised for those who love and stand with His people Israel!