What Does this Holiday Have to Do with Prophecy?

In Israel, in the middle of the winter, we have a special holiday called Tu Bishvat which is the New Year of the Trees or the Birthday of the Trees. Tu Bishvat means literally the 15th of the Hebrew month Shevat: it comes at a time in Israel’s climate when it is ideal for planting trees. Eight years ago I took this picture of my oldest son, David, when he was just one year old. We went together as a congregation to plant trees in the south of Israel in honor of the holiday of Tu Bishvat. 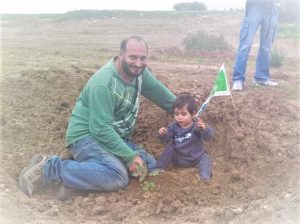 Planting a tree with my son David

The presence of forestland in Israel is, in my view, a miracle: little more than a hundred years ago when the first Jewish pioneers started arriving, this land was bare and barren. The absence of trees in the Land during that time was pronounced. The Turks who then controlled the area taxed land according to the number of trees on it, which was an incentive to remove trees. What Jewish pioneers found when they got here was a land of deserts, swamps and diseases. The first groups of Jewish settlers who tried to make in the Land failed because hardly anything grew, and many of them died from malaria and yellow fever.

When the pioneers who eventually established one of the first settlements (Petach Tikvah, or Door of Hope) were surveying the land, one of them famously remarked that there was no birdsong to be heard, something he considered a bad sign. But the pioneers of the First Aliah (the first immigration) refused to give up. They dried up the swamps though various methods, including planting huge Eucalyptus tree groves (the Arabs started to call them Jewish Trees) which require large amounts of water.

Today, the large areas of what were once swampland have become some of the most fertile and productive agricultural lands in Israel, including the great Jezreel and Hulda valleys. The areas that were once swampland were so disease-infested that hardly any animals were able to live there. After the swamps were drained and the land rehabilitated from all the salts, animals—especially birds—began populating those areas, bringing with them the sound of birdsong—something that wasn’t heard in these areas for centuries!

Therefore, when we went to plant trees together as a congregation in an area that would become a forest, I was excited. I took my young son along because it was important for me to plant a tree together with him. Our connection to the Land is something of great importance, and I wanted my young son to begin connecting with the land that our forefathers prayed for generations to see but were unable. In our generation, it is a great honor to work the Land of Israel and to be able to cause the desolate places to thrive. Just planting a tree that will be part of a forest in Israel is one of the ways we can be active participants in this miracle called “The Establishment of the Jewish State”.

These trees are a living memorial to God’s faithfulness to His promises and a fulfillment of prophecy before our eyes:

“‘But you, mountains of Israel, will produce branches and fruit for my people Israel, for they will soon come home.  I am concerned for you and will look on you with favor; you will be plowed and sown, and I will cause many people to live on you—yes, all of Israel. The towns will be inhabited and the ruins rebuilt. I will increase the number of people and animals living on you, and they will be fruitful and become numerous. I will settle people on you as in the past and will make you prosper more than before. Then you will know that I am the Lord.”