Honoring the Founders of Tiferet Yeshua

Last month, we had the opportunity to celebrate and honor Tiferet Yeshua’s founders, Ari and Shira Sorko-Ram, for the occasion of Ari’s 80th birthday. Ari and Shira founded Tiferet Yeshua congregation twenty-five years ago in their basement in Ramat HaSharon. Under their leadership, Tiferet Yeshua became what it is today: a thriving, Hebrew-speaking congregation in the heart of Tel Aviv, committed to discipleship and evangelism and a light to our city. Several of us gave tributes to Ari and Shira during the celebration, and we wanted to share them with you. It turned out that we all focused of the same special things about Ari and Shira: their priceless investment into who we are today as a congregation. 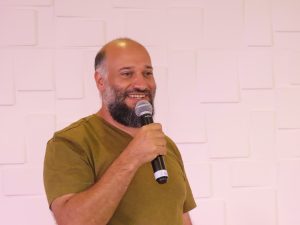 I would like to share a little bit about the beginning of Tiferet Yeshua congregation which started out in Ari and Shira’s house. That simply means that Ari and Shira opened their house in order to build the congregation, which says a lot: today when I host people at my house, be it ten, twenty people, I know how much work goes into preparing and then cleaning up afterwards. Back then in the beginning days of Tiferet Yeshua, week after week, Ari and Shira hosted the whole congregation at their house. And from that place of opening their home to everyone, just like Abraham our father opened up his tent, the gift of warmth and hospitality has become an important part of our congregation. Today at Tiferet Yeshua, when our Friday meeting ends, it does not actually end because people stay on for much longer to talk, eat, and spend time together, just like family. These are the roots that Ari and Shira put down for the congregation back in those days when they hosted the congregation at their home.

What was the congregation like back then in the Sorko-Ram’s basement in Ramat HaSharon? Who was on the worship team? Ari and Shira. Who would pick up and drop people off at their homes late in the evening after gatherings? Ari and Shira. Who would preach and teach? Ari, Shira, and later on, Asher. Today Asher is a regular teacher here at Tiferet Yeshua. Back in the beginning days of Tiferet Yeshua, right after Asher arrived to Israel as a new immigrant with broken Hebrew, Ari recognized that he had a teaching gift and would encourage Asher to give messages in the congregation. With his typical family warmth and acceptance, Ari gave Asher a place to teach in this congregation of native Israelis, even with his beginner’s Hebrew.

An orphan who became a father-figure to many

On the occasion of Ari’s 80th birthday celebration, we want to thank both Ari and Shira for their loving and generous hearts. Ari and Shira are a spiritual father and mother for me. And I am not the only one. For many people, Ari is a father figure, and many have been welcomed into his and Shira’s spiritual family. That is especially amazing considering the fact that Ari grew up as an orphan, without a father and mother. Despite that, God has made him into a loving father figure to so many people. We are so grateful for Ari’s life and that he continues to be a father and grandfather here at Tiferet Yeshua.

The warm family home that became a congregation – by Shosh Navon, beloved grandmother of Tiferet Yeshua 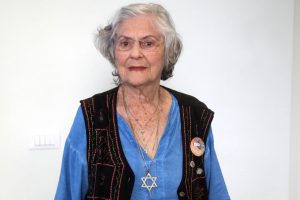 First of all, as Ari’s “older sister”, I can say from the grand heights of my 89 years, that fountains of youth still flow in you Ari at your young age of 80!

Dear, beloved Ari, at your arrival of this age of honor, you are not just a hero, you are the crown of this congregation, and Shira is the diamond in it. I remember those days of meeting in the “cave” in Ramat HaSharon, your warm and pleasant home that you opened for a gathering of believers. I say “cave” because when I came for the first time, I naively thought, “This must be the cave of the Rashbi!” I searched the for the ‘carob tree’, but I did not find it. Instead, I found the cave of Yeshua and His abundant love that has accompanied me to this day.

Since then, as they say, ‘much water has flowed’ in the Yarkon River, and, after several incarnations, congregation Tiferet Yeshua arrived at this our permanent address here in Tel Aviv, thanks to Ari’s initiative. Today we are so proud of you, Ari and Shira, and of this our “palace of prayer”, where Yeshua, Beloved of our hearts, shines forth from every corner. We wish you and us many more years of love and togetherness as the Tiferet Yeshua family.

Healing from the heart of a true spiritual father – by Tamar Afriat, worship pastor 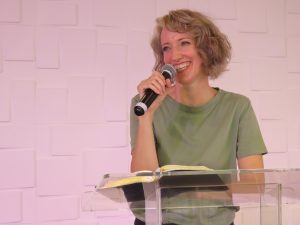 When I first arrived at Tiferet Yeshua congregation over fifteen years ago, I came as a sheep wounded by a pastor from another congregation. Back then, I had made the cynical decision not to trust a spiritual leader again. I had been so hurt and disappointed by my former pastor that I mistakenly thought that expecting the worst was the way to manage any future hurt. However, God had so much grace on me, despite my immature decision, and within a matter of years, I realized that I was healed from that “pastor” wound and from my own rash vow. The means that God had used to heal me were none other than Ari himself.

When Gil and I stepped into the pastoral role here at Tiferet Yeshua six years ago, we knew that we were stepping up to serve a congregation with a deep and enduring spiritual heritage: first and foremost, Yeshua as the center, anointed teaching and worship, evangelism, and a sincere family openness and warmth. These are the foundations established by Ari and Shira. Even though I am in the pastoral role today, I still feel the support and encouragement from my pastor, Ari, and I continue to be inspired by Shira, by her work ethic, her positive outlook and vision, and by her enduring passion for God and advancing His kingdom here in Israel. What a wonderful heritage we have received from them!